Beginner’s guide to MongoDB and Rust

These days non-relational databases are everywhere. Almost all popular languages have drivers for these databases. Personally, I’m a fan of MongoDB as it’s fairly easy to work with, performs well, and suits all my needs and then some!

In this post, we’ll take a look at the Rust driver for MongoDB. By the end of this article you’ll be able to operate on your own collections using Rust.

Please bear in mind that this article will stick to relatively basic operations. The goal of this article is to get you up to speed with the MongoDB driver, that’s all.

We will learn how to:

One of the very first decisions you have to make is whether you’d like to query the database synchronously or asynchronously. The driver supports both synchronous and asynchronous operations, so it’s up to you to choose the one that suits your needs best.

The driver supports both Tokio and async-std runtimes for asynchronous processing, but Tokio is used by default. Since I don’t really care too much about which asynchronous runtime we’ll use, I’ll stick with the default: Tokio.

Be sure to check out the documentation if you’d like to change the default behavior of the driver. It also describes how to make use of the synchronous methods (should you want to use those instead).

Getting started with the MongoDB driver for Rust is easy, just add it as a dependency to your Cargo.toml file and you’re good to go!

I’ve also added Tokio as a dependency, but that’s just because I use the asynchronous version of the MongoDB driver. 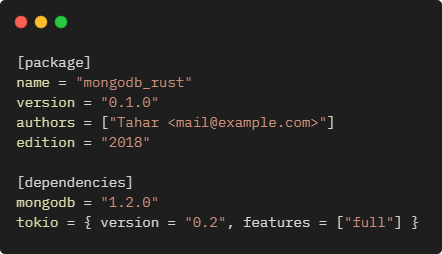 We’ll use a connection string to connect to a MongoDB instance.

Connecting to a MongoDB instance (created with Carbon)

Once a connection has been established, we can use the client instance to get access its databases and, in turn, their collections and documents.

Accessing databases and their collections (created with Carbon)

Inserting data into a collection

Let’s start out by investigating how we can create documents.

We’ll need to find a way to serialize data before we can store it in MongoDB. Data in MongoDB is stored in a JSON-like format. Since JSON isn’t a compact, nor efficient format, MongoDB uses BSON(binary JSON) instead.

To help us generate BSON, the MongoDB driver comes with a special macro to generate BSON. Alternatively, serde.rs can be used to easily serialize structures into BSON as well.

We’ll cover both approaches below.

In the BSON module, we find the doc! macro. This macro can be used to quickly create BSON data.

To make use of this macro, add the following “use declaration” to the top of your Rust source file: use mongodb::bson::doc.

We can then use the macro to generate a new BSON document:

BSON from a structure

Generating BSON from a structure is slightly more complex. It’s not terribly difficult, but we will need to update our Cargo.toml file to include the Serde crate: 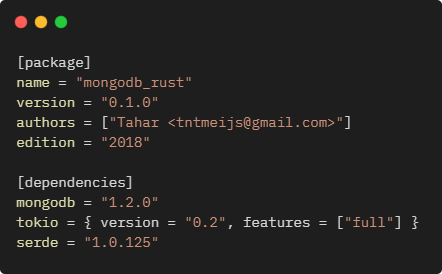 We need Serde so we can get make use of its Serialize and Deserialize attributes: use serde::{Serialize, Deserialize};

Now that we have Serde as a dependency, we can create a new data structure that will represent our document. The big advantage of representing structures instead of the macro mentioned previously is that you can now easily modify the document’s structure.

The new structure will have the same fields as the BSON generated by the macro. This allows for easy comparison between the two approaches.

Document as a structure (created with Carbon)

This structure has three annotations:

Creating an instance of this structure is straightforward and will not be covered. It works exactly the same as any other structure in Rust.

We took a bit of a detour there with all the BSON talk… But we’re finally ready to start inserting data into our collections!

Inserting BSON data generated with the macro is easy enough:

Inserting a structure into a collection using the doc! macro (created with Carbon)

If you’re using structures, however, you’ll run into an error that tells you that a structure of type mongodb::bson::Document is expected.

To fix this, import the mongodb::bson::to_document function. This method allows us to serialize our structure into BSON as shown in the snippet below:

Inserting a structure into a collection (created with Carbon)

Reading data from a collection

One of the common operations you’ll most likely perform on your collections is reading data from them. The BSON currently in our database is fairly boring, so we’ll clear out the existing collection to prepare for the next chapter…

Also, let’s create a new structure called Person and give it some properties: 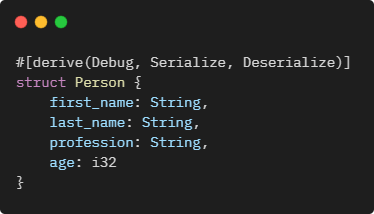 We’ll go ahead and insert a couple of these objects into the collection. Check out the previous chapter to learn how you can insert the data.

Bonus points: read the documentation and use insert_many to insert a bunch of documents at once!

If all went well, you should end up with a database that looks somewhat like so: 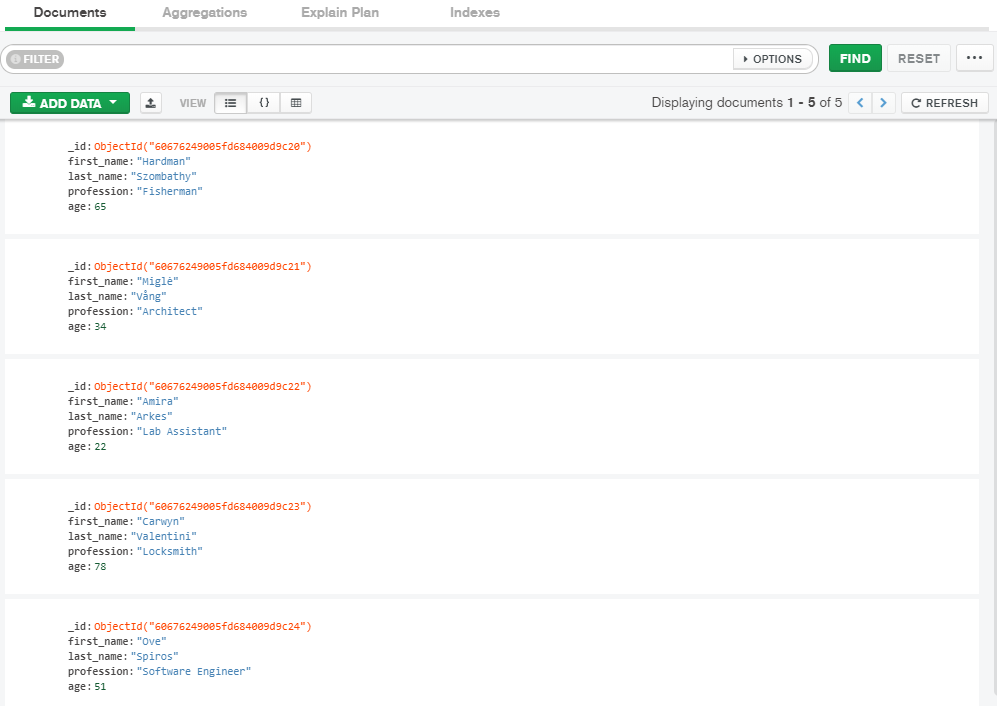 Reading data from a collection is relatively easy. You have multiple functions at your disposal to do so. I’d highly recommend looking at the documentation to see what the other functions do, but we’re just going to have a look at the find_one() function.

This function does exactly what you’d expect it to do: it’ll find a single entry in the database that matches your filter.

Reading a single document from a collection (created with Carbon)

Personally, I find the macro easier to read and use, but that’s just personal preference.

Updating data in a collection

Updating data in collections is relatively simple. The difficult part is constructing a good query. Once you have a query, you’ll just have to make a call to update_one or replace_one in order to submit your updated data.

You’ll have to make the decision whether it’s better to update a couple of fields, or replace the entire document with a new one. Both functions take in almost identical arguments, so it should be easy to convert the code above into a replace operation instead.

Deleting data from a collection

Removing your data is as easy reading it. In fact, the code is pretty much identical, except for the function’s name!

Delete an existing document from a collection (created with Carbon)

I hope this short introduction to the MongoDB Rust driver has helped you to get up to speed with MongoDB and Rust. Obviously there’s a ton of stuff we haven’t covered yet in this article, but you should now have enough knowledge to figure it out by yourself.

For instance, we’ve only covered the simplest database functions. The driver comes with a bunch of other functions such as find, find_one_and_update, find_one_and_delete, insert_many, count_documents, and many others!

I’d highly recommend you to check out the crate’s documentation to learn more about the Rust driver.

Thank you so much for taking the time to read this article.

Have a good one.